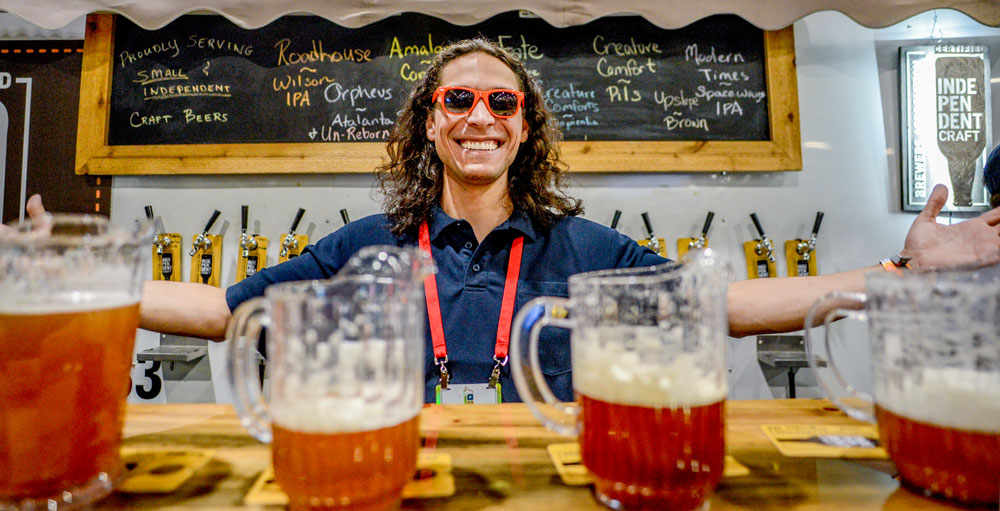 The Great American Beer Festival Pavilions showcase some of the ways that small and independent craft beer has become a huge part of so many aspects of our lives. From the way we eat to the places we travel, craft beer enriches our experiences and connects us to the culture of new places.

The pavilions provide the perfect place to relax and hear from some of the most talented and charismatic brewers in the U.S. 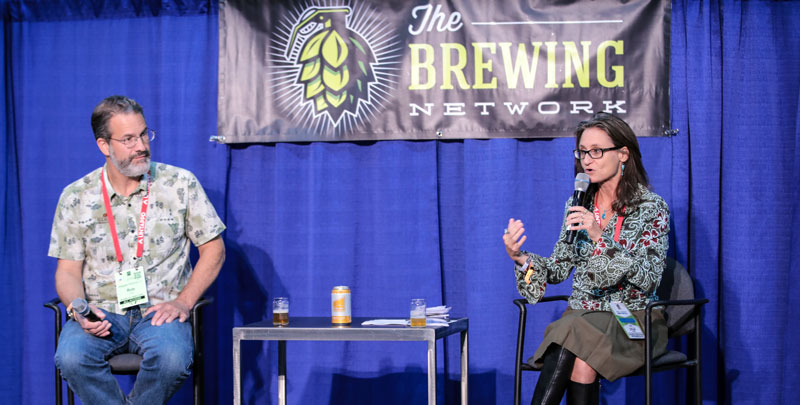 Hosted by The Brewing Network

Embark on a journey with the provocative personalities and innovators of the brewing community as they share their stories and beers. Learn about the creative processes behind some of today’s most successful craft beers.

6:30 p.m. | The Innovation at Allagash with Jason Perkins, Allagash Brewing

Join master brewer Jason Perkins on a guided tasting of three new beers from Allagash Brewing Company. The tasting will feature a Pilsner with Brett, a witbier, and a sour beer aged on cherries. Explore the flavors of these diverse styles and learn how brewers are exploring new techniques, ingredients, and styles. Maine lobster will be paired with the Pilsner to showcase the style’s compatibility with shellfish.

Join chef and Certified Cicerone Jensen Cummings of Brewed Food and Good Bugs amd John Giarratano of Inland Island Yeast for an exploration of altered fermentations of hazy NEIPA. The duo collaborated with Odd13, 4 Noses, and Jagged Mountain to create a single base beer recipe, then each brewery used a unique yeast strain for fermentation. See and taste for yourself the results of this innovative approach!

What’s the difference between fresh hops, wet hops, and dry hopping? Join Great Divide brewing manager Kyle O’Loughlin for a deeper dive into these various hopping techniques and their utilization in the brewing process.

Come explore the mouthfeel, flavor, color, and aroma of a popular style. Join Jamil Zainasheff of Heretic Brewing Company on a guided tasting comparing clear, hazy, and fruited hazy IPAs. Learn about the brewer’s approach to each style and the direction each beer can take the palate regarding flavor and mouthfeel. Taste how heat from chilis in a dish interact with each style and decide if your palate is quenched, settled, or lit on fire from each bite.

Being a small brewery doesn’t mean you can’t have fun with barrel aging beer. Since 2015, Wolf’s Ridge Brewing’s barrel program has grown from three local bourbon barrels to more than 130 casks of various spirits and sizes from all over the world. Come sample a unique array of the many experimental beers Wolf’s Ridge brews with wood in mind.

Fruit beers can be more than orange hefeweizens and strawberry blonde ales. Join Blaine Landberg and Thomas Vo of Calicraft as they lead a curated tasting of these versatile beers. Explore how fruit interacts with yeast and bacteria, how acidity and bitterness play a role in perception, and how fruit (instead of malt and hops) can be the defining flavor in gluten-free beverages. Tasting will include a selection of barrel-aged sours, tropical fruit beers, and gluten-free beverages.

When you consume beer, you only taste sweet, sour, bitter, salty, or umami. What you experience is flavor: the combination of taste, smell, temperature, and mood. Come explore with Douglass Miller, lecturer from the SC Johnson College of Business, The Hotel School at Cornell University, and learn how what you taste can impact your personal experience with beer from Odell Brewing Company.

Learn about the trajectory of beer throughout Latin America and the Caribbean and why certain styles prevail more than others. Explore the role of Latinos in the current beer industry and the intersection of beer and culture.

Check out the ther ’round the campfire to sip beers as Andy Sparhawk of CraftBeer.com hosts some of the best-known—and under-the-radar—independent craft brewers! The CraftBeer.com Campground for the ultimate beer experience at the Great American Beer Festival. The CraftBeer.com Pavilion offers a fun and interactive way to immerse yourself in the world of small and independent craft brewers. Meet some of today’s hottest brewers and industry professionals, taste beers with professional beer judges, and more. Step into the world of CraftBeer.com, where you’ll find the perfect match between beer education and entertainment.

Gather ’round the campfire to sip beers as Andy Sparhawk of CraftBeer.com hosts some of the best-known—and under-the-radar—independent craft brewers! The CraftBeer.com Campground is located near The Backyard.

Times and presenters are subject to change.

6:30 p.m. | Sit & Sip Exclusive: How to Send Back a Beer at a Bar! with Bridget Gaunter and Matt Meadows, BA Draught Beer Quality Chair

Matt Meadows and Bridget Gauntner of the Brewers Association’s Draught Beer Quality Subcommittee want you to help promote quality beer at all of your favorite drinking holes. This presentation will arm you with knowledge regarding the importance of a proper pour, glassware, and clean lines and what to look for as a customer. It’s okay to send back a beer to the bar if it doesn’t taste right. Bridget and Matt will demonstrate how to do this tactfully.

Garrett Oliver is the Brewmaster of The Brooklyn Brewery, the author of The Brewmaster’s Table and Editor-in-Chief of The Oxford Companion to Beer. Over his 30-year career he has brought many innovations to craft brewing, including the world’s first brewing collaborations, beers based on cocktails, secondary fermentation on natural wine and cider lees, and a particular focus on beer’s culinary talents. Garrett has hosted more than 1,000 beer dinners and tastings in 17 countries. In 2014 he became the first brewer to win the prestigious James Beard Foundation Award for “Outstanding Wine, Beer or Spirits Professional.”

Odd Side Ales is a family of gifted individuals, focused on the shared goal of crafting unique products, while maintaining the utmost quality. With a focus to creatively stay on the leading edge of craft beer styling, Odd Side strives to introduce new recipes that push the boundaries of flavor combinations and craft beer categories.

Mari and Will Kemper have brought exceptional craft beers to their customers across America, Mexico and Turkey since 1984 and are glad to bring guests their exceptional beer and food in an inspiring, friendly, and lively environment. Chuckanut was recognized as the Small Brewpub/Brewer of the Year in 2009 and 2011 confirming that their approach results in making some of the best beers in the world.

Josh Noel has written about beer and the beer industry for the Chicago Tribune since 2009. He is the author of “Barrel-Aged Stout and Selling Out: Goose Island, Anheuser-Busch and How Craft Beer Became Big Business,” which tells the story of craft beer’s rise from scrappy underdog to global force demanding the attention of the world’s largest beer companies. “Barrel-Aged Stout and Selling Out” was named best book of 2018 by the North American Guild of Beer Writers.

After nearly a decade of investing in and supporting other entrepreneur’s dreams, Shyla left her position with a social impact investing firm in late 2013 to pursue filling her own niche in the craft beer industry. With a love for craft beer, brewing, entertaining and design, along with the support of her partner, family, and friends, she took on the challenge of developing Bow & Arrow from the ground up. As Founder and CEO, Shyla has been responsible for setting the vision for Bow & Arrow and for the nitty gritty details of development and execution of a business plan, financing strategy, securing capital, building a team, contract negotiations, site selection, and design/development of the brewery and onsite Beer Hall.

Lallemand’s presence in the brewing industry dates from the early 1970s when the company started producing dried pure culture brewing yeasts for beer kit manufacturers in Canada. In subsequent years, this activity was expanded to the production of other specific ale and lager beer yeast strains for different clients in the United States, Europe and Australia and Asia.

For thousands of years, Chicha and Pulque were the two bright lights illuminating the way for brewers in the Americas. Brewed from gluten-free ingredients, corn and aguamiel, these beers are rich in flavor and deep with history. Little known in the US, Dos Luces looks to these traditions for inspiration and aims to explore the vast possibilities these truly American ingredients hold. Come join us and drink something old and new, complex and simple. Come follow the lights, come follow Dos Luces.

Founded in 2011, HenHouse Brewing cranks out awesome beers with an uncompromising and fearless pursuit of our goal: creating new and interesting kinds of delicious. HenHouse is the work of our hands, hearts and brains and we hope you enjoy the beer as much as we enjoy making it.

FiftyFifty Brewing Co. in is best known around the world for its Eclipse Barrel Aged Imperial Stout. The brewery is also widely praised for its styles including Donner Party Porter, West Coast Haze and TRK. FiftyFifty won “Brewery Group of the Year” at the 2018 Great American Beer Festival.

Bottleshare supports industry workers and families experiencing adversity outside of the workplace, reciprocating the love and strength that characterizes craft culture and the people that make it so special. When a fellow craft beverage worker is experiencing an emergency or extreme hardship, we not only want to help them financially, we want to lift their spirits, give them something to celebrate, and share our story in such a way that they feel their very own hope renewed. 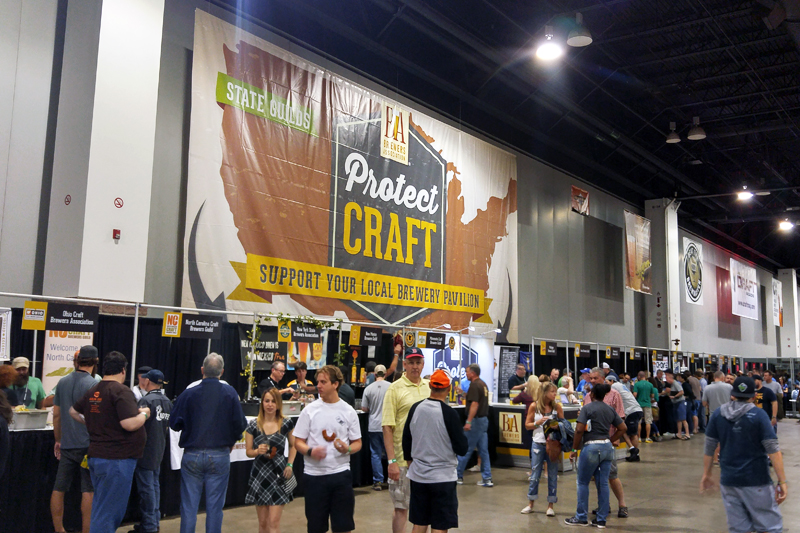 State brewers guilds are one of the most important voices in protecting and promoting a state or region’s independently-owned, American craft breweries! Enjoy craft beers from participating guilds as they showcase 169 unique breweries from their home states not available elsewhere in the festival hall!